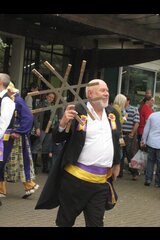 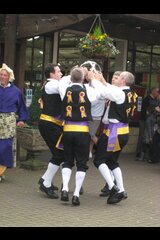 The Hoddesdon Crownsmen have retired

So who are the Hoddesdon Crownsmen?

The Hoddesdon Crownsmen are a rapper sword side, founded by Mac Jones in 1968 and based in Hertfordshire, England. We perform rapper dances based on those originally danced in the North East of England, where traditionally each village or pit would have its own dance. We perform three dances composed from elements of several traditional dances, plus the Beadnell dance.

As well as rapper, members of the side perform morris jigs and a version of the Sixpenny Handley mummers' play. We dance in black breeches and waistcoats with white shirts and socks, tastefully trimmed with purple and gold. 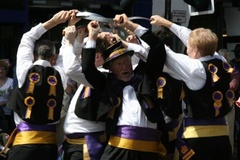 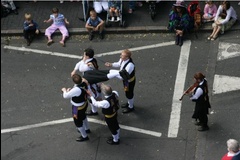 Rapper is an English traditional dance, probably dating from the late eighteenth century. It's related to the morris traditions but is danced rather faster and with complex figures, and inside the pubs if possible. It's performed by five dancers, linked together by their two-handled flexible steel-bladed swords which they twist and turn to make intricate patterns, and supported(?) by two characters called Tommy and Betty. See our photos and videos. 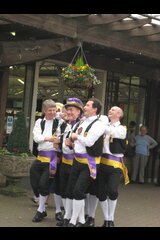 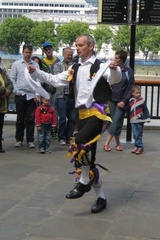 Where does it come from?

Rapper was originally danced by coal miners, and it's thought that the swords may have originated from the steel blades used to scrape the sweat and grime from the pit ponies.

Each pit would have its own team, and there were regular competitions. The pride of the pit was at stake, so the dancers were sometimes even given time off work to practise. These days many sides take part in DERT, the annual competition, as a chance to show off what they can do and meet other sides. It's organised by a different host side each year, and the 2015 competition is being held in Bristol in April. 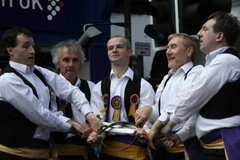 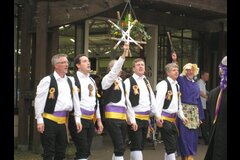